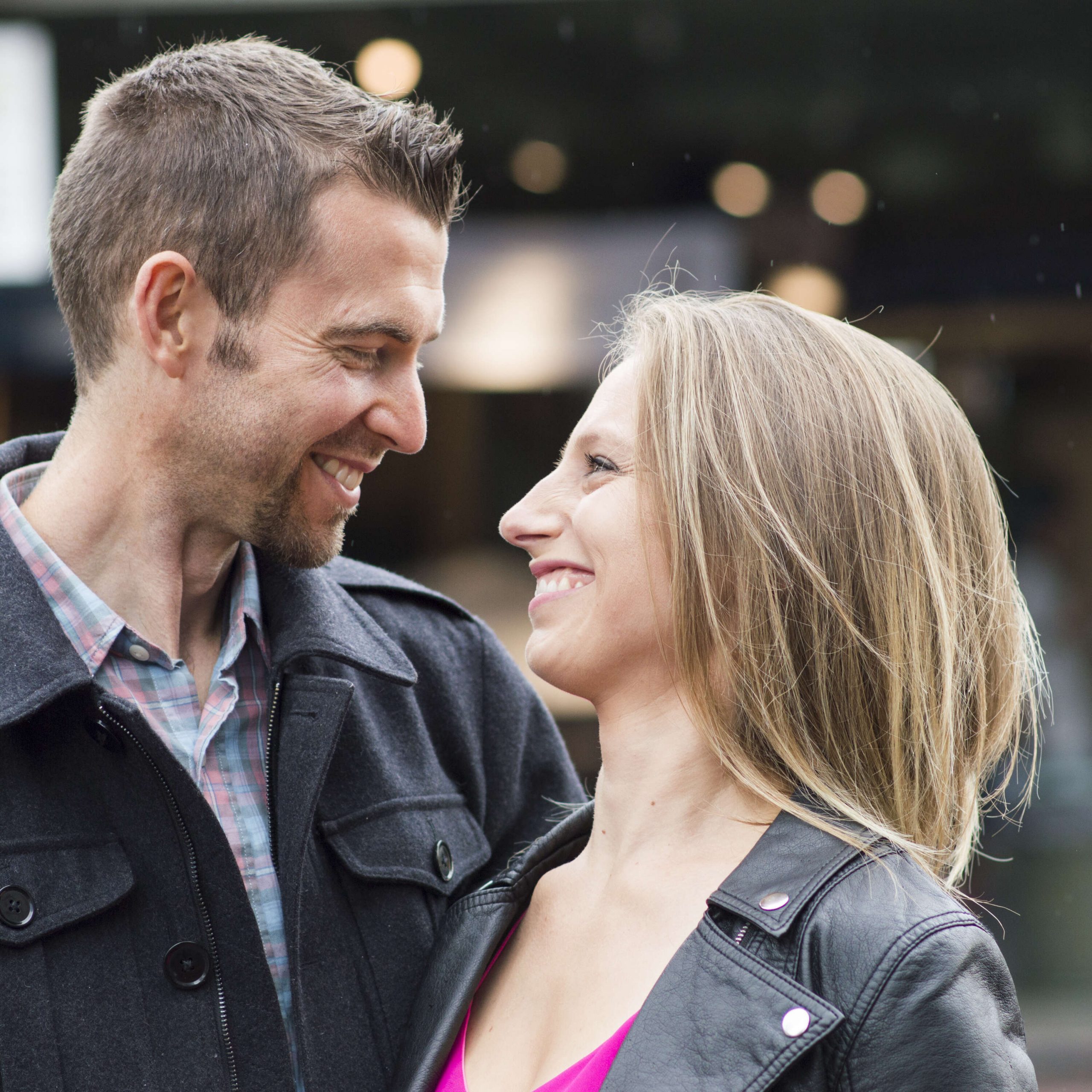 Welcome to Marriage Help like you’ve never known it before.

This is not typical Christian churchy marriage help that doesn’t move the needle and leaves you feeling like a worthless, ball-less chump who still can’t attract his wife.

This is not legalistic “husband do this,” “wife do that,” duties that lead to obligation and a dead bedroom.

This is KINGDOM MARRIAGE MASCULINITY TRAINING.

-This is confident and assertive communication.

-This is decisive and compassionate leadership.

-This is authentic gritty manhood.

-This is deep transformative connection with Jesus.

-This is miraculous life in the Spirit.

-This is a safe, secure, honored, esteemed, and valued wife.

-This is sex revived.

Believe it or not, it did not come from applying the typical church advice to husbands:

See, I had already been trying those things! They weren’t working!

I was going crazy trying to “love my wife”, when in reality all I was doing was pushing her away. And no matter how hard I prayed, I was stuck and our marriage was hurting.

Judging by all the normal Christian church wisdom for marriage, I thought I was an amazing husband.

But I was painfully wrong.

All I was doing was NEEDING my wife. I was whiny. I was manipulative. I was trying to perform all these romantic tasks so that I could get what I needed from her.

So, I course corrected and I learned how to be a man. Not a watered-down nice guy who was the sweetest little Christian man you could ever imagine.

The answer was not to fix my marriage.

The answer was to learn who I was, as a son of the Father, as a man, as a warrior in service of my King. That was my broken foundation. All attempts at fixing the marriage were pointless until I fixed that.

As a man trying to find my way in the world, without a whole lot of masculine role models to go by, I battled depression daily and couldn’t shake the idea that God was just not going to work for me.

I felt alone, though I believed in Jesus. I felt like I was on  my own to figure this all out and I was doing a terrible job at it.

But that changed, my friend.

AND IT CAN CHANGE FOR ANYONE ELSE WHO WANTS IT. 🔥🔥🔥

All participants MUST go through the preliminary call with Matt. Consider it a free coaching call and application all rolled into one 🙂 Schedule with the button.

Our live calls will be held on Tuesdays from 8am to 10am Central Time (US). For Twelve Weeks.

While these dates are our official live call dates. In the event that unforeseen circumstances come up, and a live call has to be moved, I will reschedule accordingly.

All calls are recorded in case you have to miss a session. 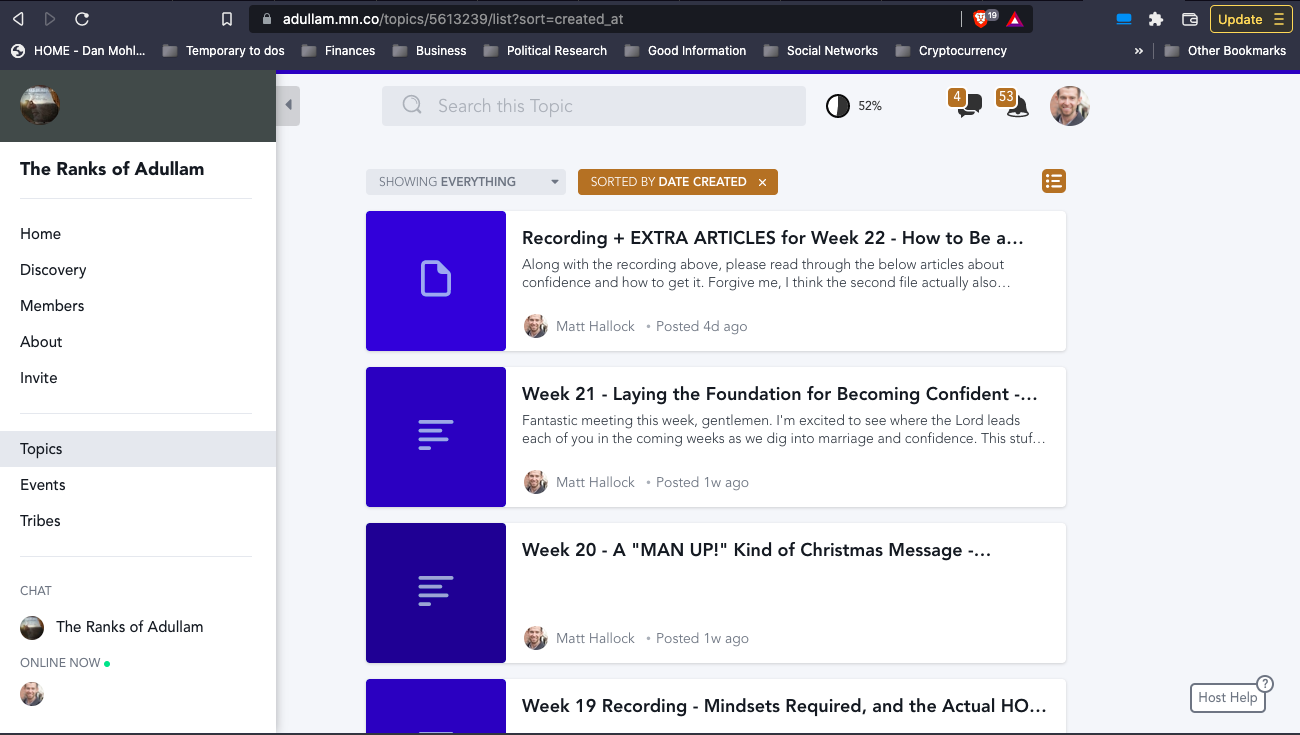 Plus, you’ll get additional bonus teachings released by Matt before the group even launches.

ONE: DE-CHURCHING YOUR MARRIAGE

• Overthrow the lies that have kept you wishing your wife would still want you.

• Leave behind the damaging religious mindsets about marriage, passion, sex, attraction…you name it!
• Catch God’s ACTUAL desire for what your marriage can be like. 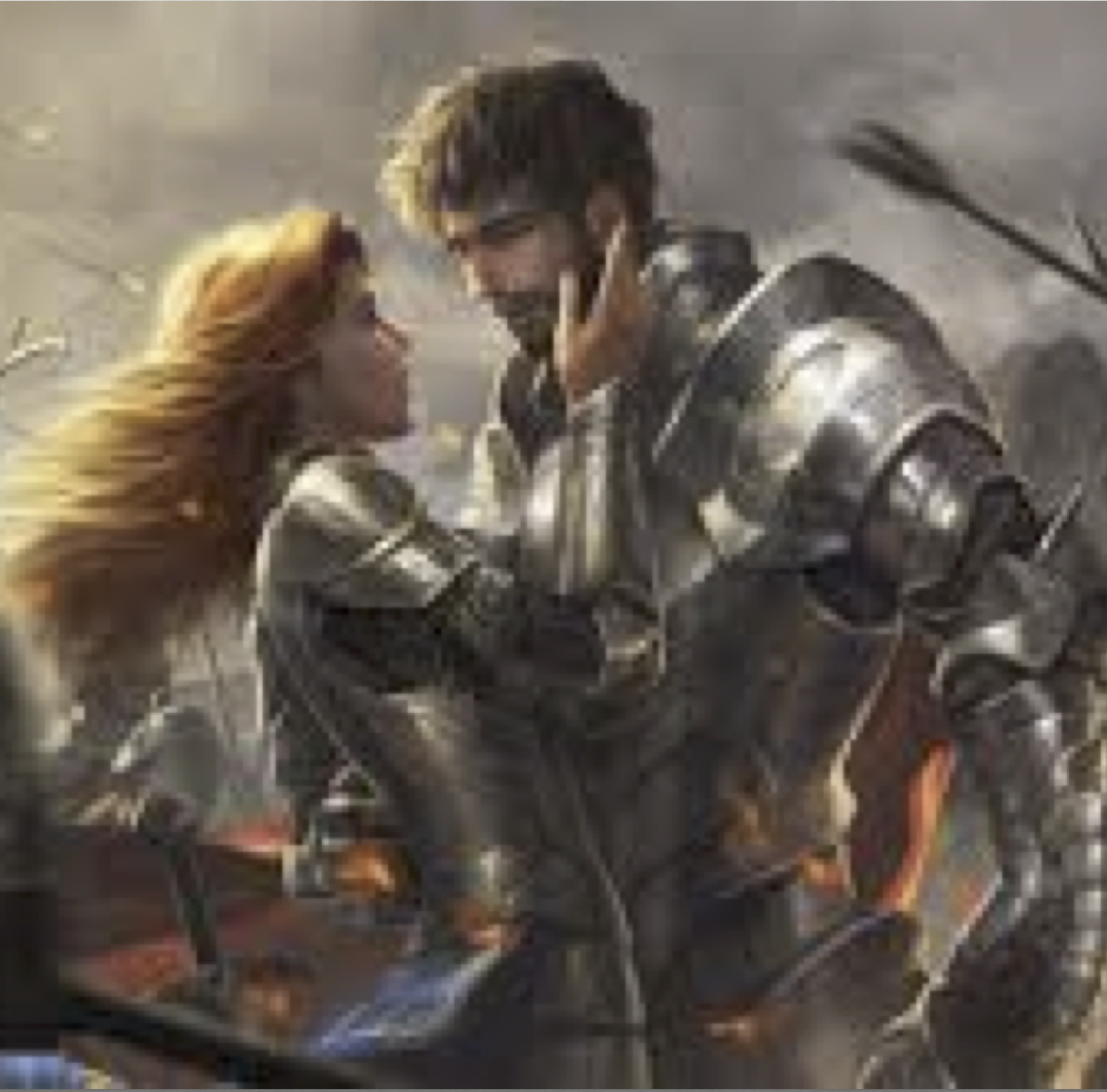 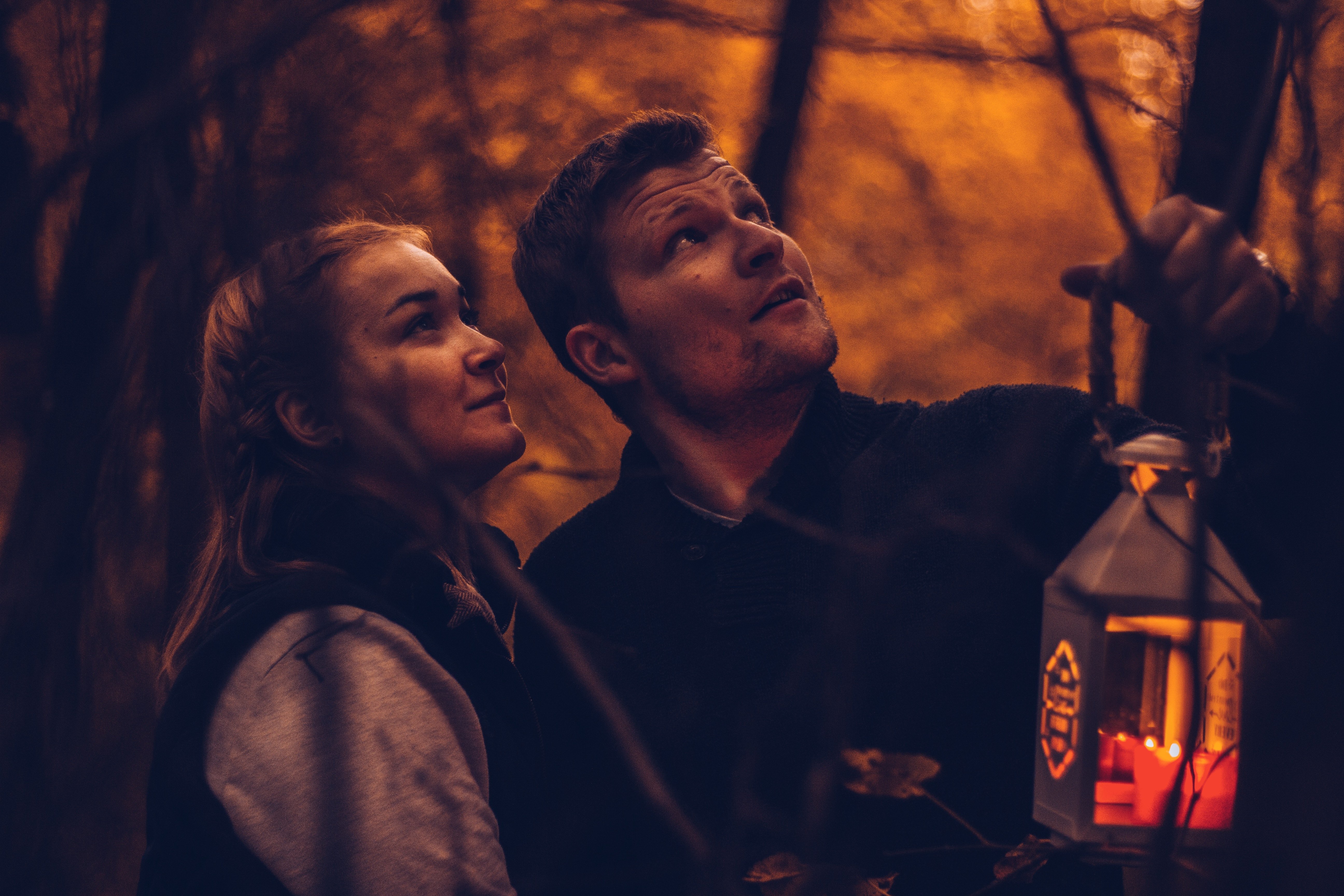 Together, we get you to come alive through the DNA of a Man framework: Identity, Principle, Mission.

• Use Taking Inventory and Taking Ownership + the Passive Accommodations exercise to find where you’ve been leaking confidence, mojo, and attraction.

• Learn what REALLY turns your wife on.
• Stop being the victim!

Become a supernatural Man of Dominion in your marriage. 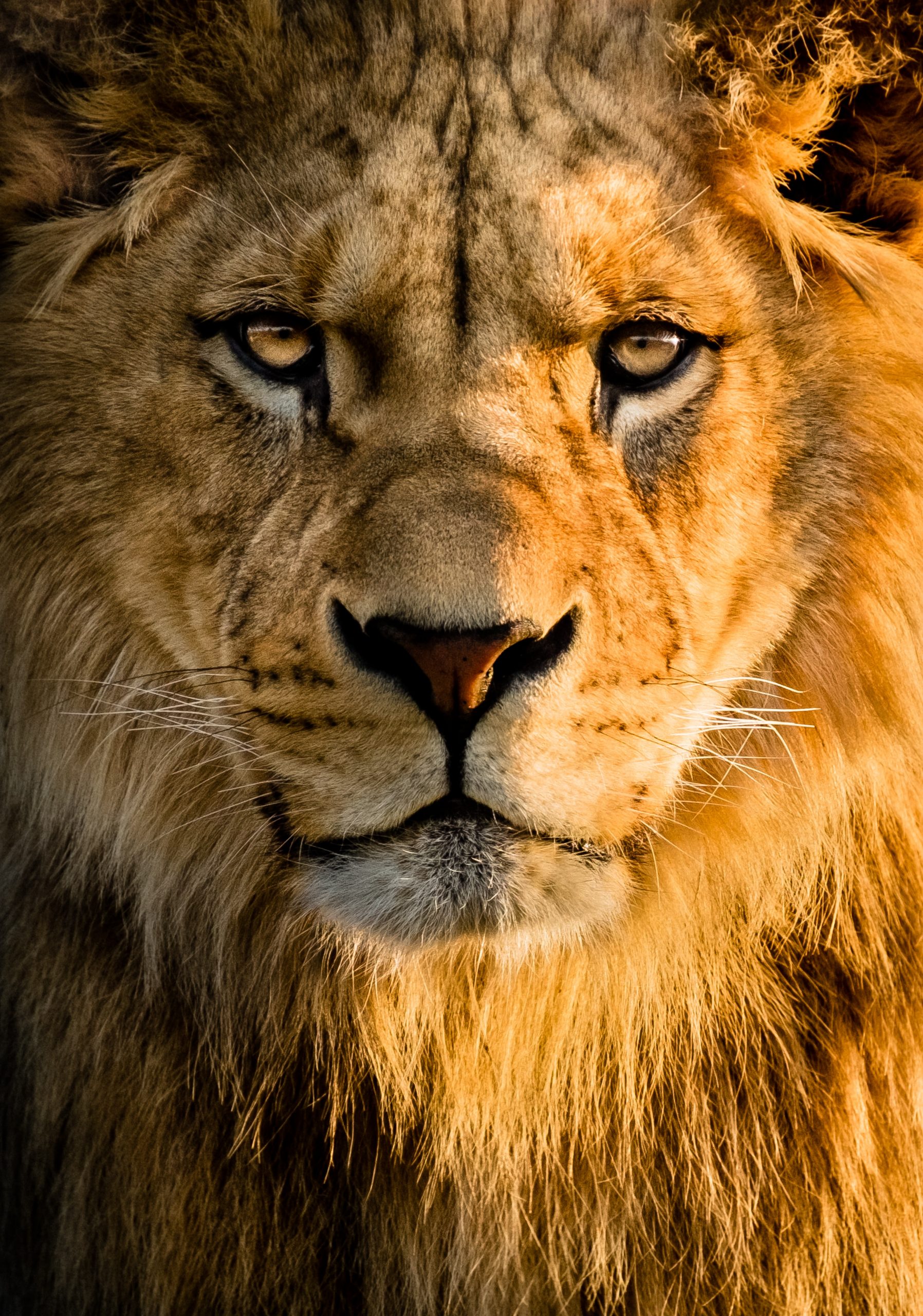 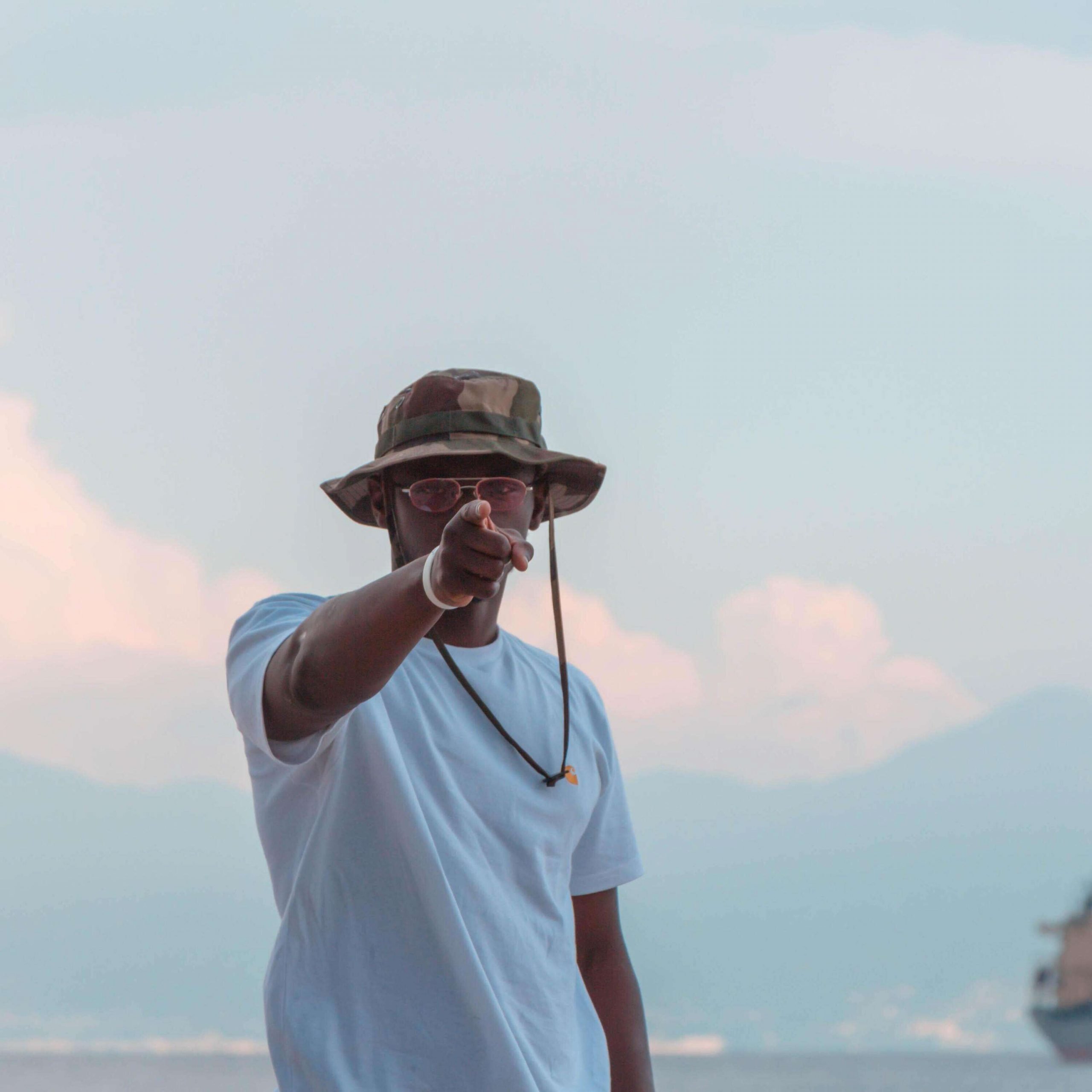 FOUR: HOW TO MAINTAIN YOUR KINGDOM FRAME

FIVE: TRUTH YOU SHOULD HAVE BEEN TAUGHT ABOUT SEX WITH YOUR WIFE 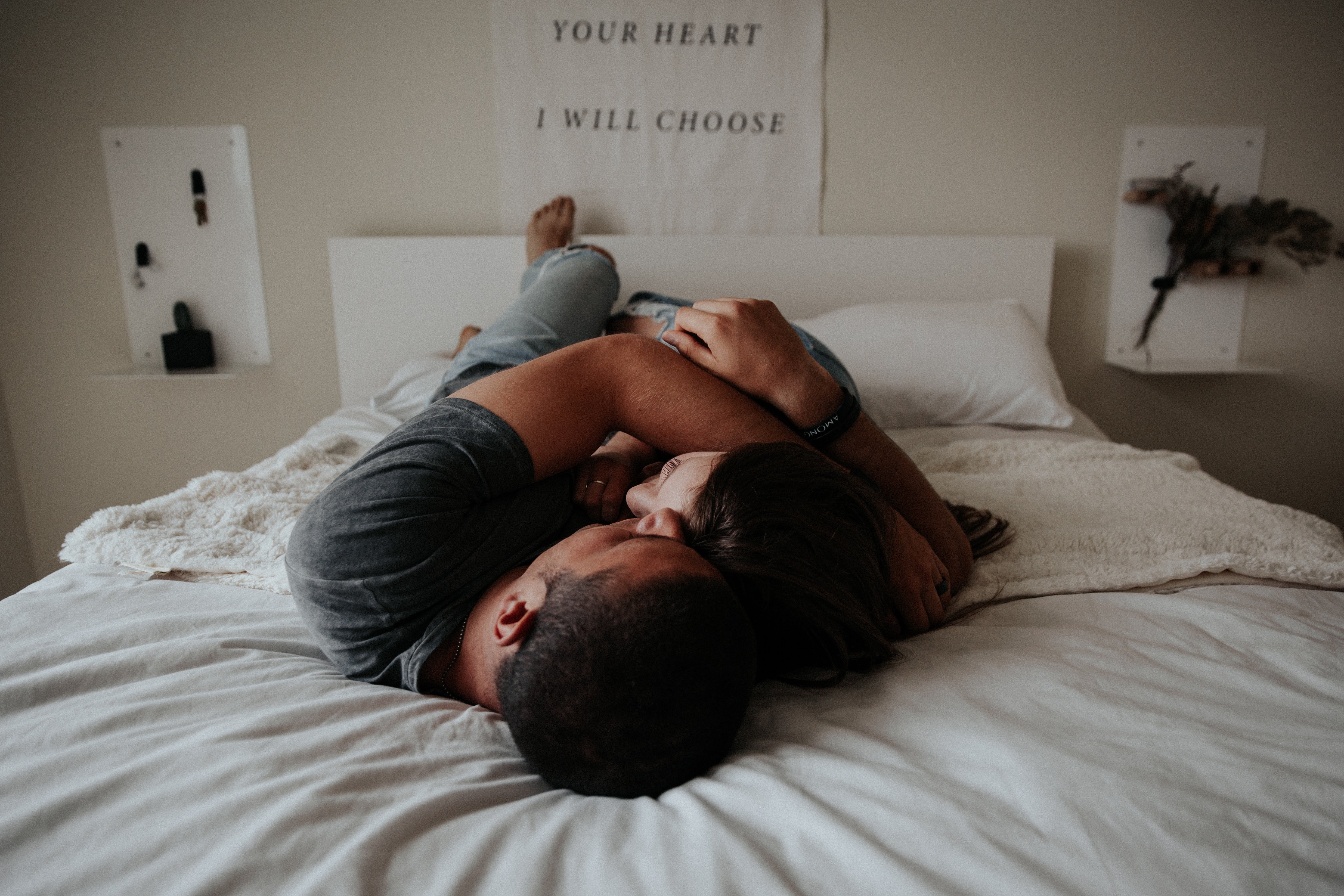 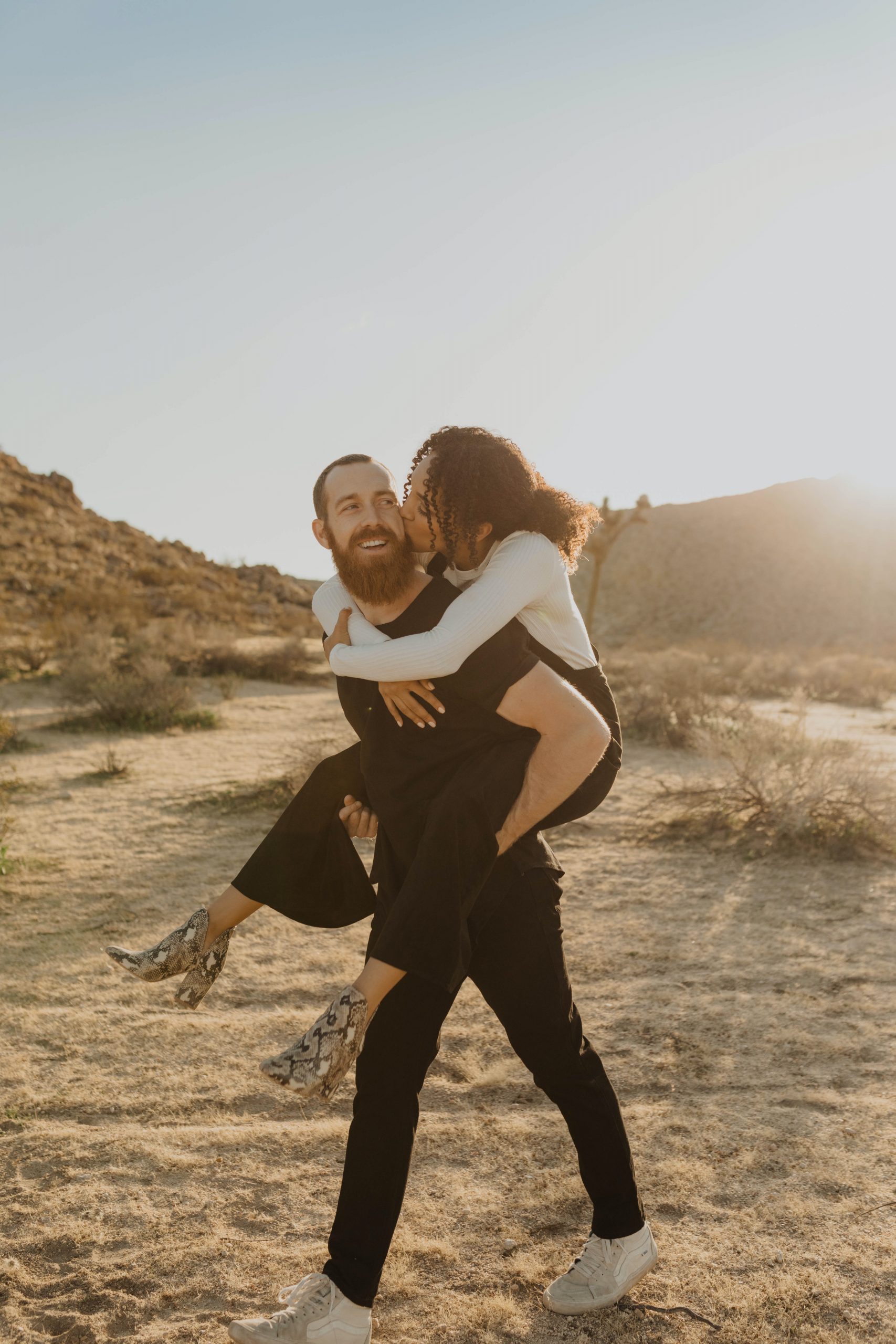 WHAT YOU GET WHEN YOU JOIN 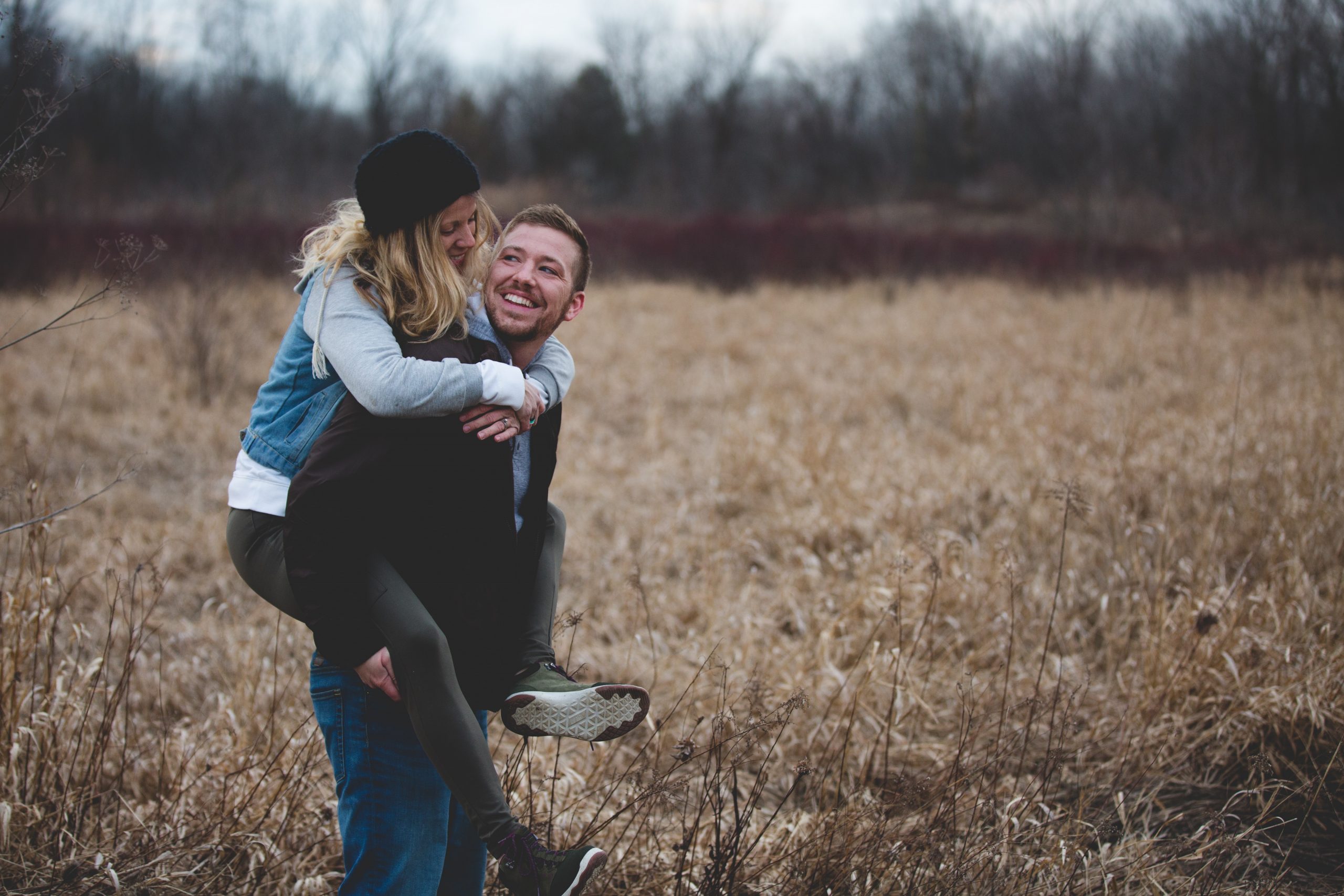 THESE WILL BE RECORDED, SO IF YOU HAVE TO MISS A WEEK, YOU’LL BE OKAY!

The DNA of a Man (Hardcopy + Kindle and PDF) This is the Manifesto of the Man Warrior King movement, and the elite group inside the FORGE. It’s 150 pages of FRESH (meaning, not the same old letter of the law religion–but instead truly ALIVE, Jesus-filled, KINGDOM) teaching on becoming a Man of Identity, a Man of Principle, and a Man on Mission. This is required reading for men who join Husbands:Resurrected.

Additional video/audio PRACTICAL training posted throughout the week to give you more transformation.

Live Prophetic Prayer and Healing Ministry from Matt and the others.

Worksheets and action steps and assignments.

You will have access to the private virtual group ONLY for members of the program.

All participants MUST go through the preliminary call with Matt. Consider it a free coaching call and application all rolled into one 🙂 Schedule with the button.

“Matt helped me to begin proactively working WITH God instead of passively hoping for a better future.”

“Matt’s work has spoken to me deeply about manhood. It’s re-energized me and given me ammunition to build being a man as a realistic goal. That my wife and children will benefit from.”

“It was so enlightening to see the areas where I have not been leading well. My transformation came when I really dove into where I was, and just being honest.”

“Absolutely changed my outlook and perspective…I am so grateful.”

“It was good being a part of a group of guys heading in the same direction to become more of a kingdom man. It was really impactful and really powerful [including] Campfires and Battlegrounds.”

PASTORS AND CHURCHES ARE SEEING REVIVAL

See How Other Men Are Finding Hope, Healing,

The DNA of a Man

This is just a fraction… 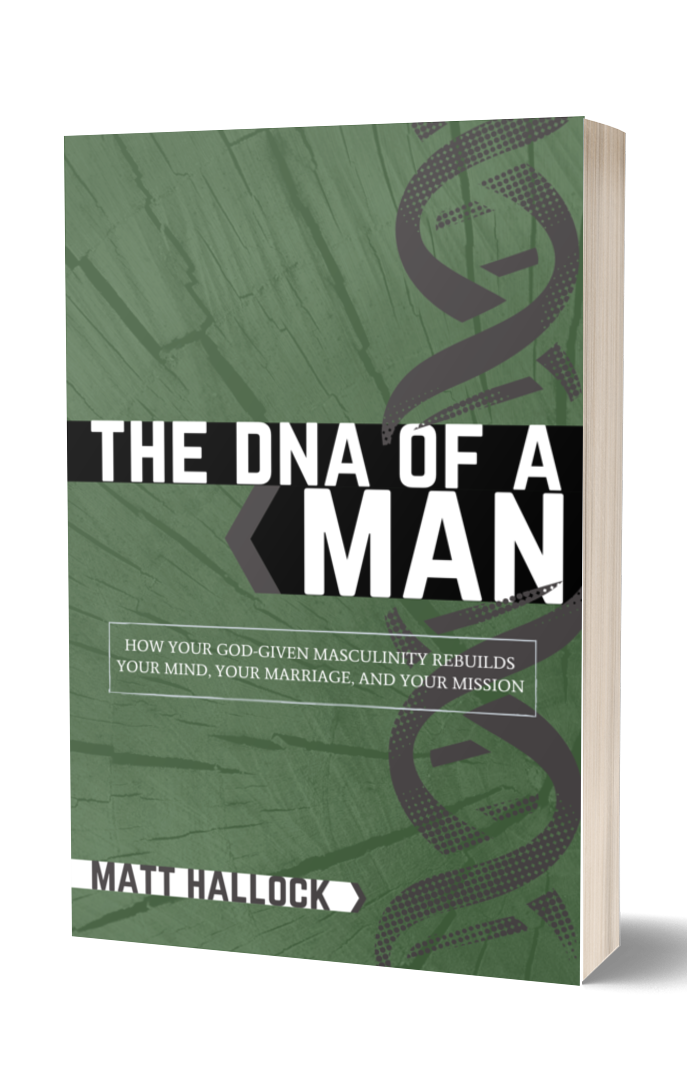 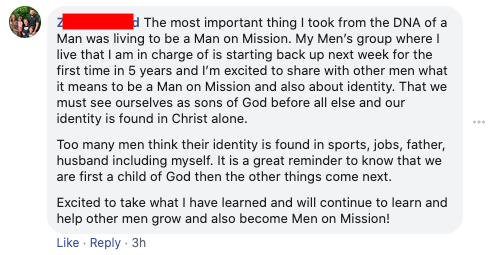 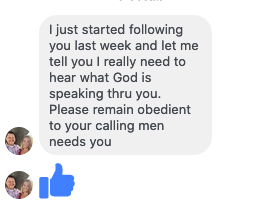 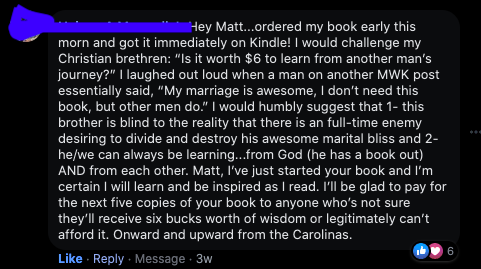 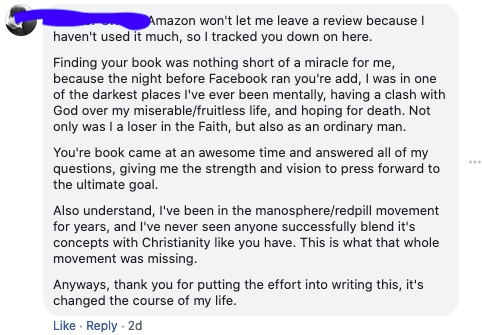 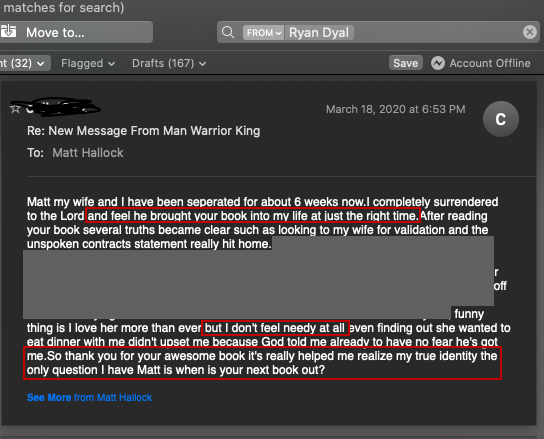 WHAT IF I’M NOT MARRIED?

You should absolutely still join us.

WHAT IF I MISS A LIVE MEETING?

You will have access to all recordings, additional training videos, and hot seat session recordings.

DO YOU OFFER A REFUND OR MONEY BACK GUARANTEE?

Yes. Within 2 weeks of the start of the program.

HOW LONG DOES THIS GO FOR?

All participants MUST go through the preliminary call with Matt. Consider it a free coaching call and application all rolled into one 🙂 Schedule here.

Our live calls will be held on Mondays from 8am to 10am Central Time (US). For Twelve Weeks.

All calls are recorded in case you have to miss a session.

Plus, you’ll get additional bonus teachings released by Matt before the group even launches.