I’m willing to bet that most of those marriages are NOT bangin’ on all cylinders (pun fully intended).

Do you feel like you’re in line to be the next statistic–an unsatisfied, undersexed, bitter guy who’s life is on hold because his marriage is struggling?

If that’s you, the pain can be awful, paralyzing even.

You might be the guy who wakes up another morning after a night of non-sex, and you have to fight the bitterness that wants to wash over you. You wanted it, but she didn’t. She never does. If she would just loosen up and be affectionate like she used to be, it would fix a whole damn lot of your marriage problems.

But she didn’t again. She never does. And so you continue in the pain of it and do your best to grit your teeth and hope for another opportunity tonight.

Meanwhile, your confidence either plummets or remains in the plummeted state already entered long ago. And let’s face it, that’s not sexy in a man. What woman would want to have sex with that anyway? 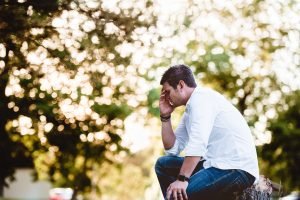 And you start to think to yourself, “I must not be that great at life. If my own wife—the one who knows me the best—doesn’t want and like me much, then who the heck do I think I am, to be trying to offer any kind of value to the world? If I’m a sucky husband, then I probably can’t do sh*t.” (I know the language isn’t necessarily fitting on a Christian blog…but this is the real stuff that men tell themselves. And the last thing any of us need is to put a cap on our honesty when Jesus knows our language anyway.)

Also…you’re a Christian. Doesn’t that mean that Jesus is supposed to help you with things like sex and having a good marriage and joy and all that. Aren’t Christians supposed to have MORE help with their sex lives? Aren’t we supposed to love better and therefore have hotter, more-often sex? If God made marriage as the ONLY way to have sex rightly, then why does everyone else seem to have a lot more fun and a lot more…period?!

Oh, it’s an excellent thing you’re here. It’s time to wake up. Jesus is inviting you. It might sting, but it will be good. You need it if you are ever going to get out of this cycle. Because I want you, and Jesus wants you, to have a happier marriage, better sex, and a more off-limits bedroom (for everyone else…like the kids!).

One quick interjection here: While the focus of our discussion right now isn’t on your wife and your thoughts toward her, one of the crucial goals of what we’re talking about is to get you to a place where you stop holding her in accusation, blame, and contempt for your pain. Yes, your pain may be real, but quick wake up call, SO IS HERS.

And I have some good news for you: Believe it or not, she is sexual too. She wants good sex with you. She wants her man. And the more you operate from a place of accusation, thinking she is frigid, unaffectionate, etc., the more wounds you heap on her, and the more you actually wound her God-given identity as a fully alive sexual woman.

She doesn’t deserve that. No matter your history, she doesn’t. She’s a gift to you, I know it. Mine is to me.

Don’t wound your wife, guys. If you feel like you can’t help it…you can.

I’ll show you how, with my own story of sexual resurrection on the next page.